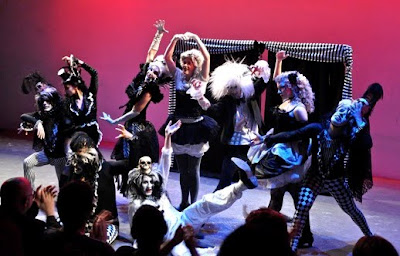 Back by popular demand! If you missed it before, RKP's morbid dance drama, The Tragedy of Maria Macabre, will perform twice more at the Access Theater on Saturday, March 19th! Performances will commence at 6:00PM and again at 9:00PM.

After performing to a sold out house earlier this month, we will be reprising the twisted magic!

Rachel Klein’s The Tragedy of Maria Macabre is a movement and visual based theater piece that uses dancers and actors to create a morbid world of fantasy and spectacle.
Upon dying, Maria Macabre is not granted eternal slumber, but instead a whirling, kaleidoscopic carnival of horrors: a morbid funhouse where humanity is stripped away and a permanent place in the gruesome chorus line is all but assured....