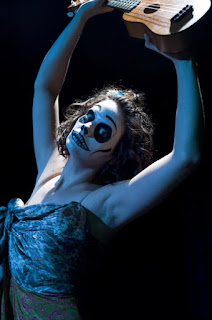 La Enferma is a series of performance pieces combining dance, acrobatics, juggling, pantomime, and human marionettes. The Mission of La Enferma is to illustrate the presence of mortality and to respond to the inevitable trauma that humankind is pressing upon the Earth. La Enferma uses skeleton iconography that derives from several cultures (El Dia de los Muertos; Mexico, Finados; Brazil, Baron Samedi; Haitian Voodoo) which traditionally are used to honor one's ancestors. La Enferma takes place in a world where all that is left of humankind on Earth is the soul, which leaves a tone that is both bleak in its macabre foresight, and whimsically inspiring with the power of the human spirit.
La Enferma is created, directed, choreographed, and produced by Rachel Klein.

Makeup Design is by Anita Rundles.

General and booking inquiries can be directed here.

Posted by Rachel Klein Presents... at 2:04 PM No comments: