RKP THEATER ENSEMBLE PRESENTS A NIGHT OF MACABRE AT THE HOUSE OF YES! 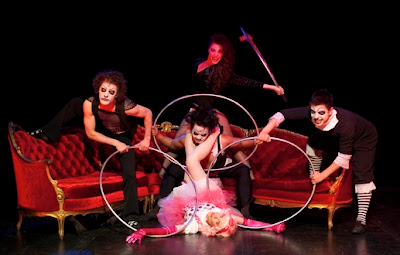 SEPTEMBER 29 @ THE HOUSE OF YES
A NIGHT OF MACABRE AT THE HOUSE OF YES will feature special performances by burlesque chanteuse Ashley Morgan Monroe (Circus of Circus), The Love Show (Nutcracker: Rated R), Scooter Pie (Shaken and Stirred Burlesque), Go-Go Harder (Meaner, Harder, Leather), singer Juliette Campbell (of Shanghai Mermaid), musician Benjamin Ickies (of This Ambitious Orchestra), aerial acts by Airin Deskies (of Lady Circus), Kae Burke (2011 New York Innovative Theatre Award for Circus of Circus), Nicki Miller (of the Skybox) and Anya Sapozhnikova (of House of Yes), acrobatics by Ryan Shinji Murray and fire performances by Evgeniya Radilova with special appearances by Eric Schmalenberger as Miriam, and a screening of the video trailer for RKP Theater Ensemble’s upcoming show, The Tragedy of Maria Macabre. The evening will be emceed by the Empress of NYC Nightlife herself, Chi Chi Valenti (Jackie Factory; HOWL! Festival).
RKP Theater Ensemble will present A NIGHT OF MACABRE AT THE HOUSE OF YES on Thursday, September 29 @ 10pm at The House of Yes (342 Maujer Street, Brooklyn; L Train to Grand Street). Tickets (Suggested donation of $20) may be purchased online at www.smarttix.com or by calling 212-868-4444. All proceeds will benefit RKP Theatre Ensemble’s upcoming production of The Tragedy of Maria Macabre, October 20-30 at The Wild Project. If you’re unable to make it to the event on September 29 but would still like to donate to the production, please visit www.indiegogo.com/The-Tragedy-Of-Maria-Macabre-1.
The Tragedy of Maria Macabre is a theatrical dance piece inspired by 19th century European Circus imagery, silent horror films, and el Dia de los Muertos. The story begins at the end of the life of our twisted heroine, Miss Macabre. Upon dying, Maria Macabre is not granted eternal slumber, but instead a whirling, kaleidoscopic carnival of horrors: a morbid funhouse where humanity is stripped away and a permanent place in the gruesome chorus line is all but assured. Arriving in the land of the dead, Maria Macabre is greeted by the King and the Queen of the Dead, and many other ghoulish Hades-Dwellers including a maniacal Ringmistress, a Beauty Queen burnt to a crisp, a menacing French Clown, and three skeletal Mariachis.
The Tragedy of Maria Macabre will play a limited two-week engagement at The Wild Project (195 East 3rd Street between A and B), October 20-30; Thursday through Saturday at 8pm and Sundays at 5pm. Tickets ($20) may be purchased online at www.smarttix.com or by calling 212-868-4444.