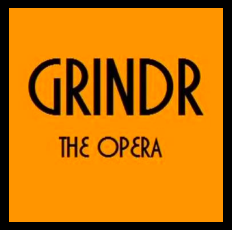 GRINDR The Opera, written by Erik J. Ransom, puts the most notorious gay hook-up app into the exaggerated world of opera. With musical styles ranging from baroque to contemporary pop, GRINDR The Opera is a daring, humorous look at the changing landscape of gay relationships, and the greatest catalyst for the shift: GRINDR.

We meet GRINDR, a mythical siren from remote antiquity who has been awoken from her millennial slumber by technology. Her power, which is derived from human lust, is exhibited as she manipulates her gay devotees in a soaring soprano.
Next we meet the boys: Devon is a romantic, Tom is a cynic, Jack is a twink and Don is a daddy. These four gay men of different "Tribes" meet via the medium of the Grindr app, each seeking a different type of connection. GRINDR guides them to intersect to hilarious and calamitous results, culminating in a grand finale wherein all the dirty laundry tumbles out.
Though the opera lives in the world of parody, it touches on some very serious, hot-button issues that exist in the gay community as it transitions into a time of wider acceptance and easy access to opportunities of both romance and lust to be sated. GRINDR The Opera is entirely sung-through and intended to be staged with a cast of five actors: The four men and the Siren, GRINDR, who is intended to be a masked man in drag. It is arranged to be performed by a band of three to five musicians.
Posted by Rachel Klein Presents... at 3:06 PM