Circus of Circus at the House of Yes! 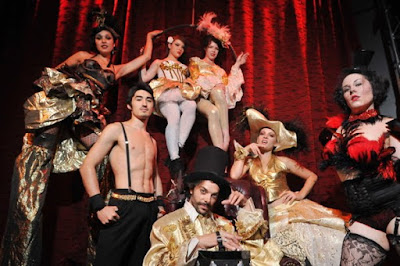 Thursdays, Fridays, and Saturdays at the House of Yes! October 1st through October 16th!

Adapted from George Orwell’s anti-totalitarian novella Animal Farm, Circus of Circus is presented as a darkly humorous satire on the performance industry told through the strife of entertainers in a corrupt circus.

Set in the middle of the Great Depression, the show combines dazzling musical theatrics and circus spectacles set to original parodies of jazz standards. The multi-talented cast of contortionists, aerialists, acrobats, actors, burlesque dancers, and fire performers parallel the characters of the original Animal Farm as they overthrow their ringmaster and band together to form their own troupe where “all performers are equal- but some are more equal than others.”

Written and Produced by Kae Burke of House of Yes and Lady Circus. Directed and choreographed by Rachel Klein (Princes of Darkness, Hound, Go-Go Killers!) with a live vintage jazz ensemble directed by Benjamin Ickies of This Ambitious Orchestra.

Show Dates: Every Thursday, Friday, and Saturday from October 1st through October 16th. At the House of Yes Theatre.

Tickets $20-$30. Available at the door or online at circusofcircus.com